skip to main | skip to sidebar

Brothers to the Rescue Godmother raves about Seagull One 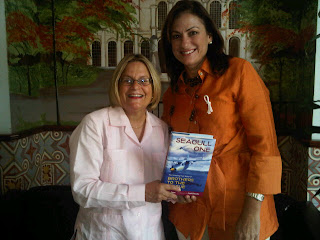 Congresswoman Ileana Ros-Lehtinen and Seagull One author Lily Prellezo met at the Brigade 2506 Center for Human Rights and Democracy luncheon on Sunday, September 19, 2010. The organization fundraises for the political prisoners in Cuba, sending necessary supplies like toiletries, pen and paper, cell phones, and other necessary items. During their meetings and luncheons, they always phone a prisoner to give him or her moral support.

Ileana was there, too, to lend her support. When the official "godmother" of Brothers to the Rescue saw Lily Prellezo, she raved about Seagull One!

The Congresswoman was an integral part of Brothers to the Rescue, repeatedly bringing the needs of the organization to members of Congress as well as the office of the President.

Thank you, Ileana, for your support of Brothers to the Rescue and the political prisoners in Cuba.

No Stranger to Paradise

To a writing paradise, that is. For four years, I've attended the Eckerd College Writers in Paradise Writers' Conference held every January in beautiful St. Petersburg, Florida. The conference takes place on the bay on the campus of Eckerd college, and is headed by Sterling Watson and Dennis LeHane--yes, Dennis LeHane!

An Eckerd freshman named Lily B. Prellezo (my daughter) told me about it! Thanks to WIP, my writing got stronger and my book was publisehd: Seagull One: The Amazing True Story of Brothers to the Rescue.

Check out the interview at http://wipalumni.wordpress.com/
Posted by Seagull One at 2:51 PM No comments:

Seagull One was released five weeks early from the University Press of Florida and it was just in time! Just in time to give everyone who had pre-ordered on Amazon.com a nice surprise in their mailbox. Just in time to get a rave review on NBCMiami.com (http://www.nbcmiami.com/news/local-beat/Seagull-one-Brohters-to-the-Rescue-The-Real-Deal-102145854.html) Just in time for rave reviews from the most important people: the readers.

One rafter who read about himself in Seagull One said "the way you described my journey was perfect; the sequencing so exact; the emotions so precise."

Another reader said: "I haven't read a book in five years; I read Seagull One in five days."

One PhD at a reknown university claimed: "I've read everything on Brothers to the Rescue, and Seagull One is the definitive history."

Now's the time to read it, before all the upcoming events. See them on www.seagullone.com or Seagull One on Facebook.

Enjoy the read!
Posted by Seagull One at 1:36 PM No comments: